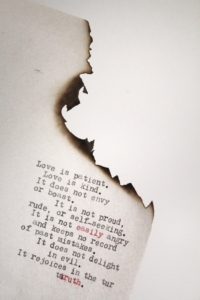 Ben and Rose met later in life. They had both been single for a long time, so when they met online in their early 40s, things seemed to move pretty fast. They loved chatting and could talk for hours about everything: family, spirituality, life, love, anything that mattered. They met up for the first time after having chatted online for a month. Chatting and sharing their lives for hours, they overstayed their welcome at the restaurant. They couldn’t get enough of each other. Everything seemed perfect. They eloped after only six months of dating and began their lives together.

They both grew up in spiritual homes and would consider themselves Christians; however, after years of going to church less and less, they both no longer darkened the door of a church except for holidays and special occasions. Ben had avoided going as much as he could because most of the “Christians” he knew went to church but lived completely different during the week. Rose got out of the habit of going after spending many Sundays alone in her home. Instead she spent her time giving back to the community and counted that as “church” but always felt something missing in her life. Ben and Rose had discussed their upbringings and Christianity, but neither of them talked about church as a priority, so after they were married, they only went when they were asked to go.

Ten years went by and brought successful careers to both Ben and Rose as well as two children. From the outside, everything seemed to be going well, but both of them knew something was off. Ben began to notice Rose wasn’t as affectionate with him as she used to be. She was always on the phone, “for work,” she’d say. She slowly lost interest in everything to do with the family, even the kids. Ben and the children spent many nights eating dinner alone as Rose would often stay late for work.

One day it all became too much for Ben, and he decided to peek at the home computer while Rose was “working late.” He couldn’t believe what he saw…emails and messages to one of Rose’s high school friends, Tim. He started at the beginning and read the first few emails, which seemed innocent enough, just catching up. He then clicked on several recent emails with the most recent email dated the day before. They were definitely flirtier than the first ones and the one from yesterday even asked Rose to meet up. He scrolled down, looking for her reply, and there it was. “Hey Tim, let’s meet up after work tonight,” His heart broke into a million pieces, but unfortunately, he knew they had been drifting apart for a long time. He just didn’t realize that she had drifted into the arms of another man.

As the days went on, Ben saw less and less of his wife. He pulled away in his anger, thinking that it wasn’t worth saving anyway. Finally, he decided he couldn’t take it anymore and decided to confront her late one night. When she finally walked through the door, Ben turned around, ready to let her have it. His anger had been building every day since reading the emails. However, one look in her weary eyes, and all anger melted away. “I’m so sorry, Ben,” she mumbled. Her eyes fell to the ground and tears poured out like a faucet.

They stayed up all night like they used to, but this time was different. There was yelling, crying, silence, more crying, and more yelling. Finally, in the early hours of the morning, they sat and held each other. They knew they were at a crossroads. They could let go of everything they had for the last ten years and walk away, or they could cling to what little was left and try to salvage their relationship.

If allowed, God always has the last word.