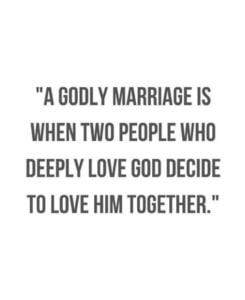 Marriage isn’t complete without the Holy Spirit. When we operate outside of that bond, the enemy will sneak in and destroy the marriage. Protect your marriage from becoming complacent. Resolve issues quickly and don’t be embarrassed to seek help with issues you can’t resolve on your own. The enemy loves to keep things in darkness. The only way to have a successful and strong marriage is to keep God first. There’s no denying the fact that marriages have problems. Your marriage may be going through a tough time right now, but you’ve got to have the will to fight for your marriage and not in your marriage.
In the Scriptures, the number one injunction is Mark 10:8 What God has joined together, let no one separate”
This clearly shows that God will not tolerate any form of interference which can destroy his original plan for marriage. While none of us were there in the Garden of Eden, we know from Genesis 2 and 3 that Adam and Eve moved around unclad and unashamed. Such nakedness depicts trust, openness, and humility. Before the entrance of sin, they spent their time communing with God and tending the creatures in their care. Such togetherness is what many homes lack in the modern society.

Unplug and Fall in love with your spouse again. Don’t allow work or your kids to get in the way of being that friend and lover that your husband or wife needs and desires. Some have forgotten your first Love. Remember God is jealous for you as it says in Exodus 34:14.

If you waiver in your communion with Christ, you will waiver in your marriage. The demands on marriages can be hard, and it does take work and commitment to have a rewarding marriage. Marriage can’t thrive when you aren’t totally surrendered to God. No one wants just to be tolerated, but instead,  celebrated.

I encourage you to commit to 7 days and read 1 Corinthians 13:4-13 together with your husband or wife, and you will begin to see things in a different light. Take time to understand God’s plan for your marriage and your marriage will Thrive.
We believe you don’t have to live unhappily ever after.